Seven years ago in 2012, a United Nations Security Council Resolution placed an embargo on the export of charcoal from Somalia. The embargo sought to address illegal logging, massive deforestation and land degradation which charcoal production in Somalia had been fueling, in addition to exacerbating communal violence and regional conflicts, which often led to humanitarian crises.

The United Nations, the Somali government and other partners have coordinated various initiatives to promote more sustainable alternative energy sources and to diversify income for communities.

In April 2019, UN Environment hosted a multilateral meeting of the Federal Republic of Somalia, the Gulf States and Somalia’s neighboring countries to bring together regional partners in support of the Somalia charcoal ban.

According to Hussein Mohamoud Hussein, Somalia’s Minister of Livestock, Forestry and Range, the production, use, and illegal trade of charcoal presents great environmental, security, economic and health challenges to Somali citizens. In his opening statement at the meeting, the minister also underlined the immense local and regional conflict that resulted from the prohibited trade. He lauded the Kingdom of Saudi Arabia for its efforts and contribution towards enforcing the charcoal ban.

Representatives of the governments of Iraq, Oman and Djibouti agreed that the illegal trade represents both an environmental and security threat to the region, and reiterated their support to the Government of Somalia.

To assist Somalia in this endeavor, the United Nations Development Programme, the Food and Agriculture Organization and UN Environment are implementing a joint Programme for Sustainable Charcoal Reduction and Alternative Livelihoods that supports policy development, capacity-building, advocacy and alternative energy, and livelihood options to reduce charcoal use, production and trade in Somalia. 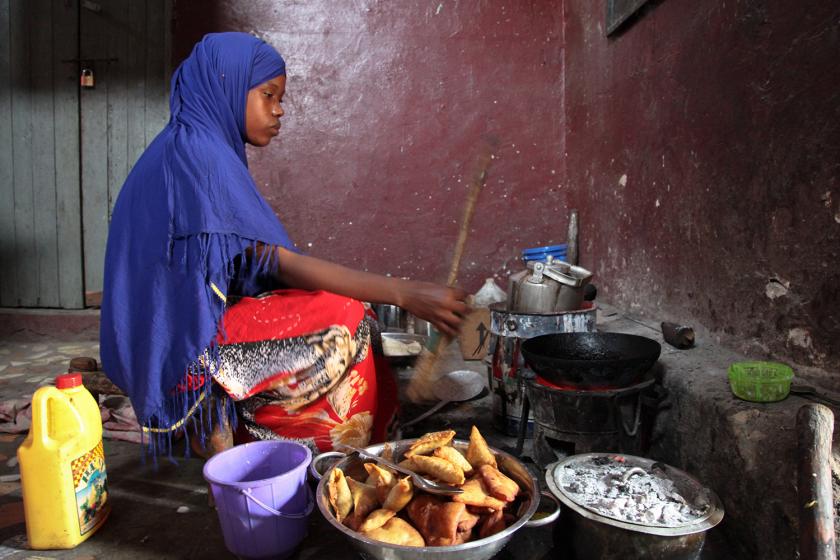 The programme advocates for six areas of intervention:

Accelerated distribution of efficient cooking stoves
Somalia’s cities, with a high population density and lack of firewood or other alternative, are the main consumers of charcoal. Over 98 per cent of the country’s urban households use traditional charcoal stoves, and most of the rural and nomadic population use firewood and inefficient biomass stoves. Distribution of efficient stoves could reduce consumption of charcoal by an estimated 50 per cent, and efficient kilns could produce 60 per cent more charcoal thus resulting in approximately an 80 per cent reduction in logging. In 2018, over 600 gas cylinders, 300 fuel-efficient cooking stoves and 20 tones of briquettes were distributed to internally displaced persons by the  Somalia Federal Government for use in cooking as an alternative to charcoal.

Introduction of sustainable and efficient charcoal production
Currently, charcoal is produced through traditional trench or earth mound kilns. These facilities have a very low yield, typically in the range of 10-15 per cent. Through efficient kilns, charcoal production could be increased by about 60 per cent, while better packaging and transport could add another three per cent thus saving thousands of trees annually.

New energy plantations
Somalia lacks sustainable plantations at the district or regional level and felling of trees from rangelands—which belong to the community—often breeds conflict. The programme promotes plantations of fast-growing multipurpose trees or shrubs species managed on the principle of sustainable use on lots of 1,000 to 2,000 acres close to villages or towns. Local communities are then tasked with nursery production and plantation campaigns. The programme provides communities with seeds, tools, other inputs and training, and monitors tree planting and maintenance in collaboration with community-based organizations and the government.

Development of solar energy
Somaliland and other parts of the country have good insolation levels. However, solar equipment is rarely available. Between November 2005 and March 2006, approximately 950 families benefited from alternative cooking energy in the form of solar cookers and new improved and efficient cooking pots, an initiative the programme has decided to build on. Introduction of locally-assembled solar water heaters and cookers only protects the country’s trees but also create new alternative livelihood opportunities.

Introduction of biogas
There is very high potential of using biogas as an alternative source of energy in Somalia. Provision of biogas digesters of varying capacities at locations that have ample supply of biodegradable feedstock and water, particularly in the proximity of slaughterhouses of all major cities, would offer a much-needed lifeline to the country’s trees.

Addressing Somalia’s illegal trade in charcoal in would allow the country to solve two problems at once: deforestation and indoor air pollution. Women and children, who traditionally spend most of the time at home are most at risk. Every year, 3.8 million people die from exposure to pollutants from cooking stoves that burn solid fuels or kerosene.